Yesterday was busy, and a lot of fun. The morning was spent travelling up to Bletchley Park and being interviewed outside by the BBC’s Adam Fleming and Simon about crowdfunding, the future of publishing and my book Saving Bletchley Park. It was a really fun interview that ended up with Simon recording close up audio of me knitting. Why knitting? Well one of the perks of my crowdfunded book, the one that sold out first included a pair of socks handknitted by me. Here are Adam, Simon and my daughter Leah, and the socks that I’ve just started knitting. 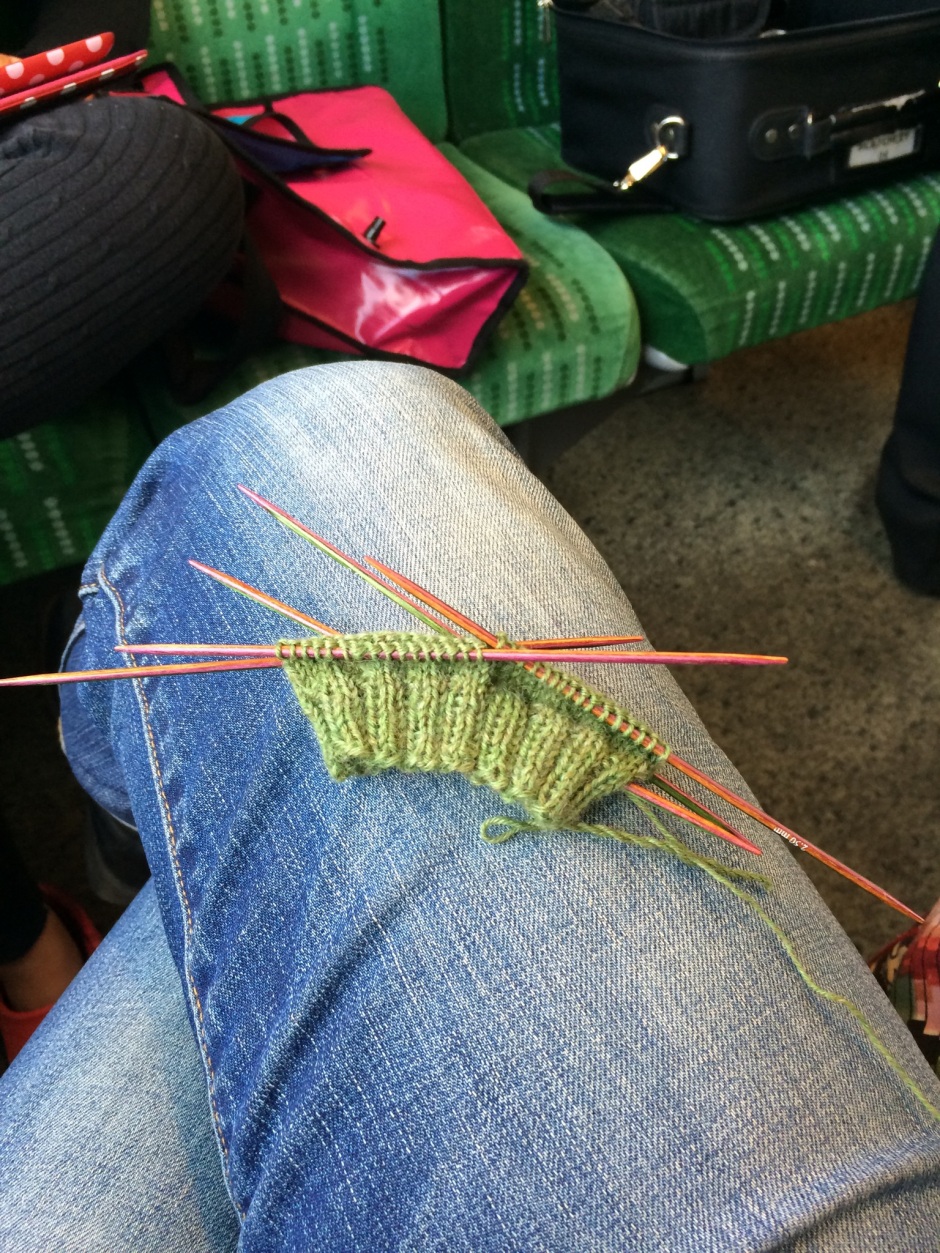 When the interview was over we went up to The National Museum of Computing at Bletchley Park to say hi and to see their new exhibitions. There are so many!

I saw the locked gates and fence that have been put up by Bletchley Park for the first time. I have to admit it was very upsetting to see them. 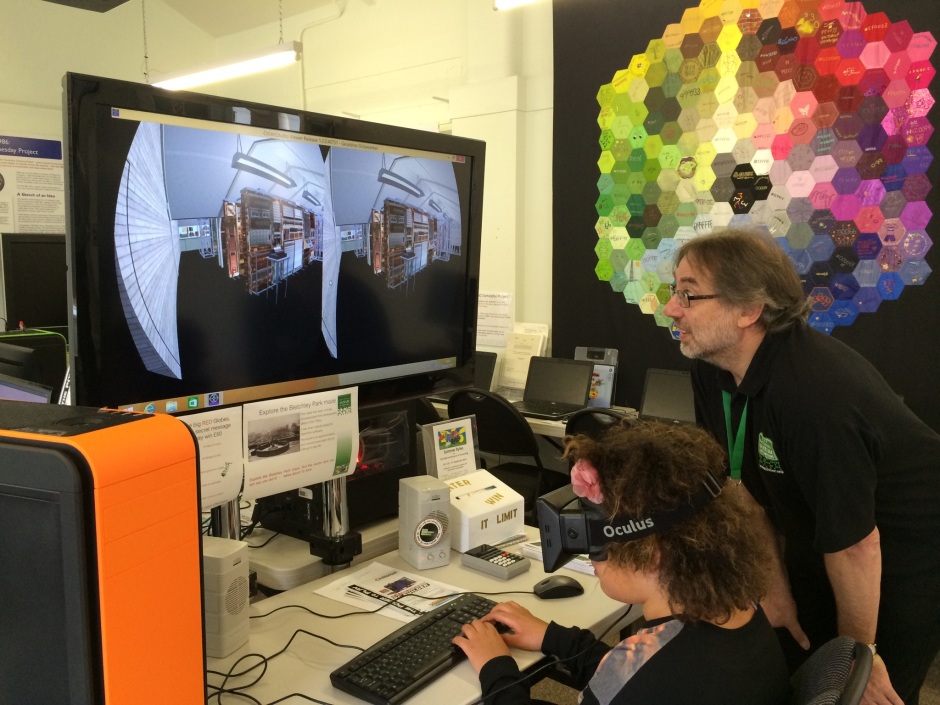 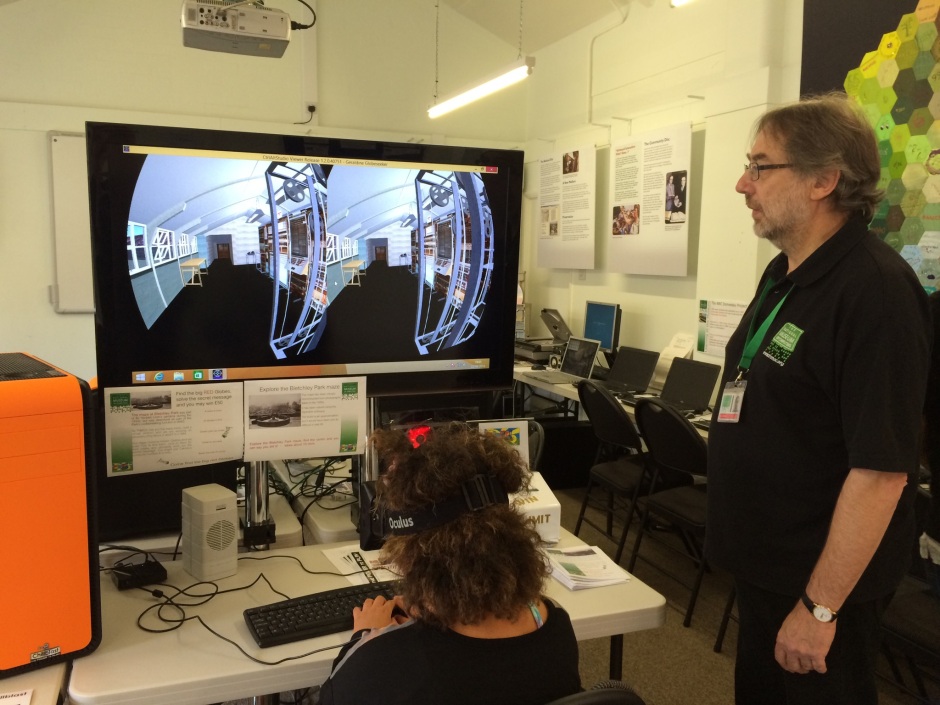 I was amazed by all the work that has been carried out at TNMOC. Lots of new exhibitions since I was last there including the women in computing exhibition featuring some real female tech heroes like Steve Shirley, Grace Hopper and Barbara Liskov. I was a bit disappointed that Turing Award winner and friend Fran Allen was not included, and that Steve was the only UK hero but, that aside it was really great to see so many women represented at Bletchley. 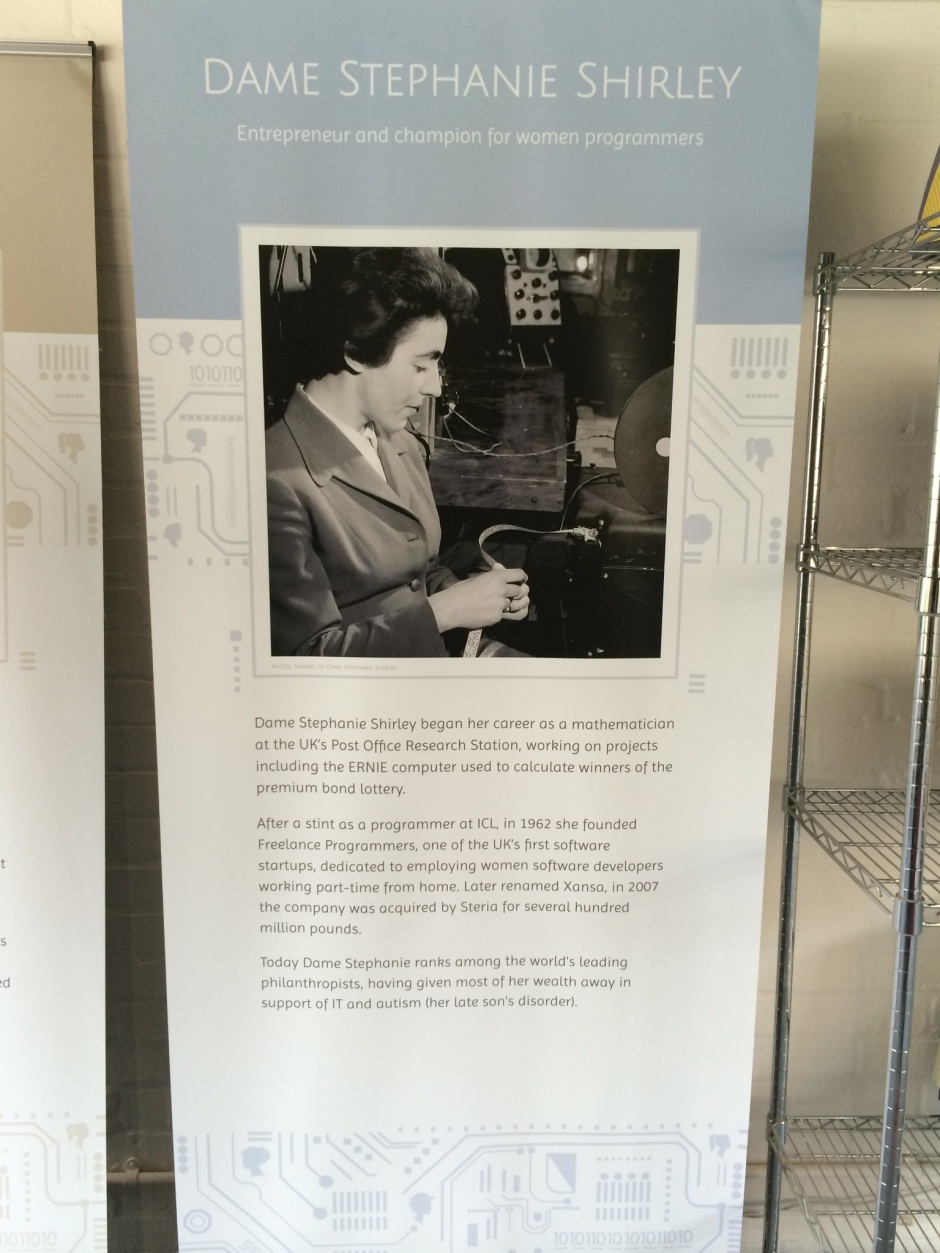 My daughter Leah had a go on several of the very cool vintage games and on the new Oculus Rift virtual Bletchley Park. An awesome project led by Chris Monk at TNMOC to create 1940s Bletchley Park for anyone to interact with. The project has only just started, but is looking great already with a virtual Colossus and the maze, complete with hidden Easter Eggs, that used to exist at Bletchley. Very cool and exciting, and needing funding.

It was fun to see Rory Cellan-Jones at TNMOC too, there to record BBC TechTent, taking pics of virtual Bletchley too. Chaperoning Rory was Helen Armfield who it was really great to meet IRL after knowing each other on Twitter for ages. 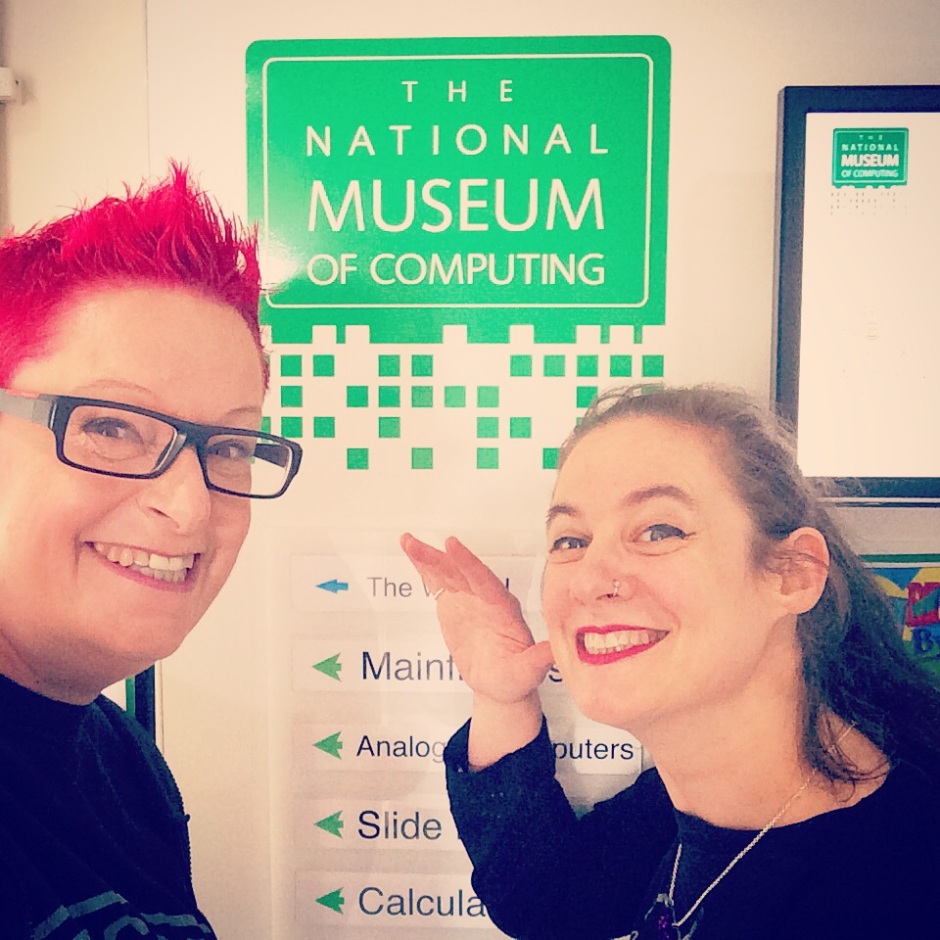 Helen told me that @documentally’s awesome social media meetup Station X is now running from TNMOC which is great news. If you live in the Bletchley area and want to meet up with likeminded geeks I highly recommend it.

I also had a great chat with Lin Jones, another of the very knowledgeable and dedicated people at TNMOC.

After lots of fun at TNMOC we headed back to London for another with Analia Plaza interview for Eldiario which was also a lot of fun.

After the interview we made our way down to my son and daughter in law’s place in south London for dinner. I wish I’d taken a photo of that, it was so delicious, dahl and rice, my absolute all time favourite meal.

We walked through Bunhill Fields Cemetery dating from 1665 as a cut through to the bus stop, I was amazed to find several famous people buried there including William Blake and Daniel Defoe. Incredible to find that just over the road from Google Campus in London’s Tech City.

We changed buses at the monument and took a couple of pics there too.

All in all it was a great day. You will be able to hear the BBC interview “Publishing Wars” on “The report” next Thursday at 8pm on BBC Radio 4. 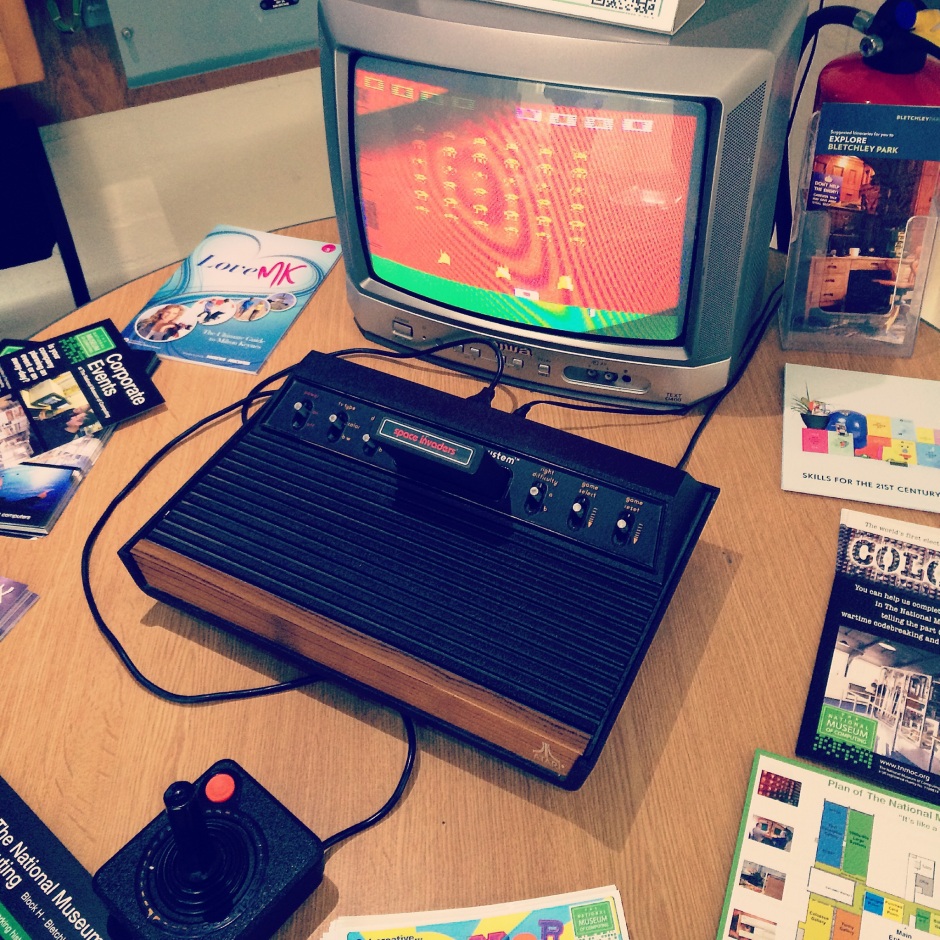 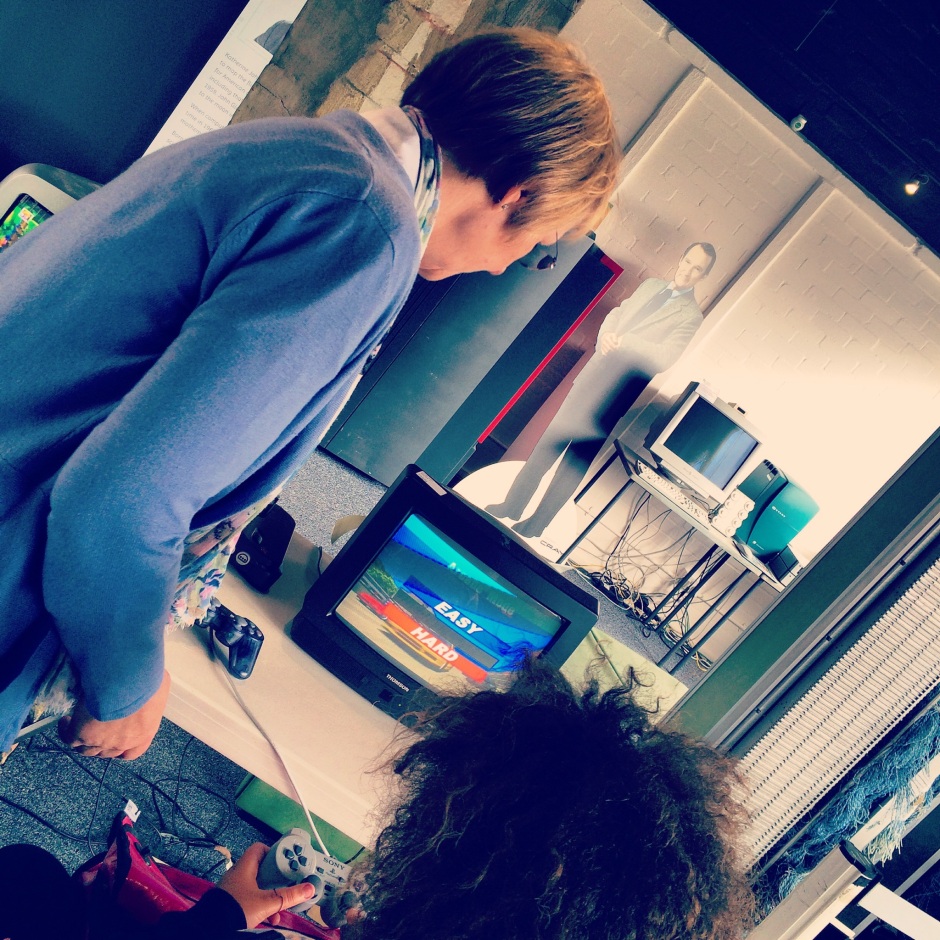