Last Bank Holiday Monday was a fabulous day for running. The weather was grey, overcast and a bit cold, which is actually great as you get quite hot when running, sunny weather is a killer. We set off from home at around 8am and got to the Mental Health Foundation banner to meet my older kids (Olly features in a couple of the photos), my sister Sarah and her family at around 9am. Sarah and I ran the race together :)) 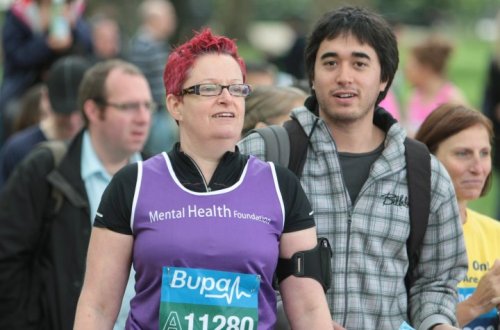 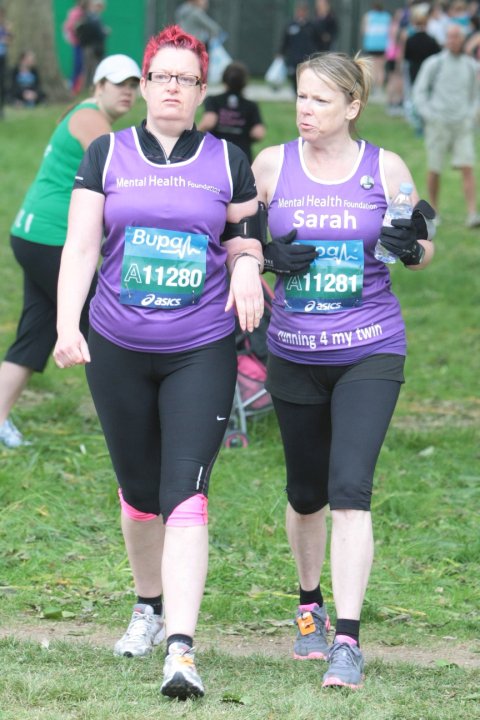 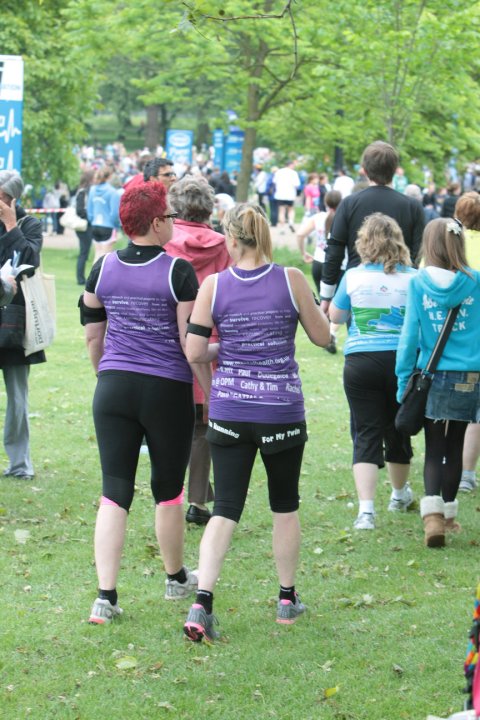 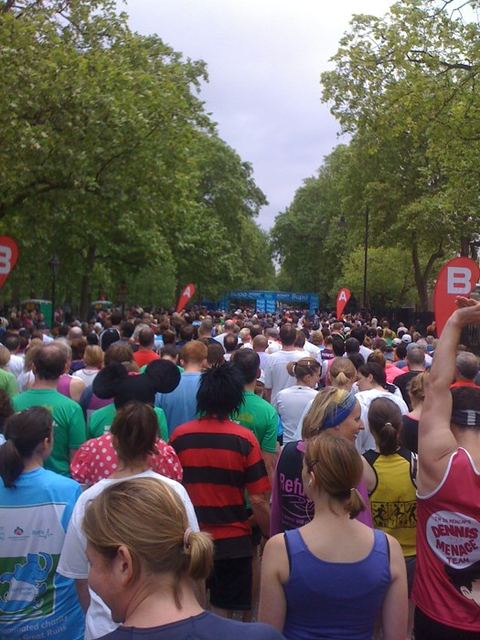 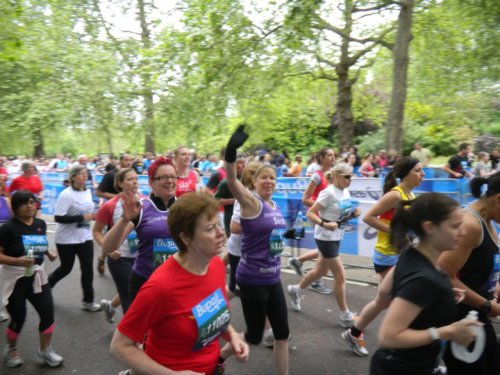 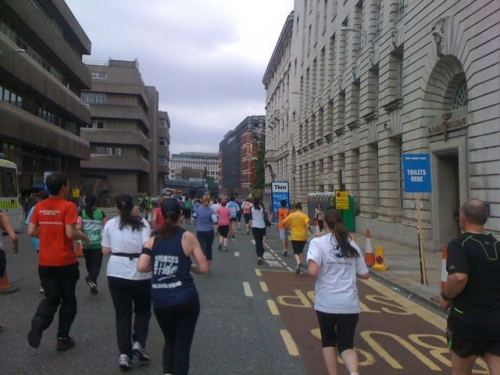 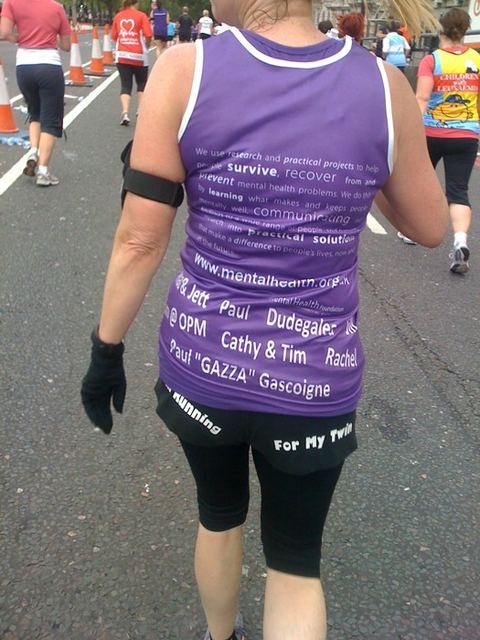 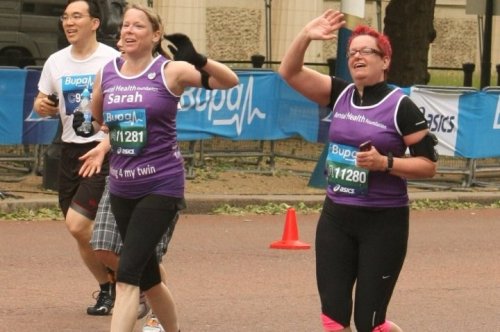 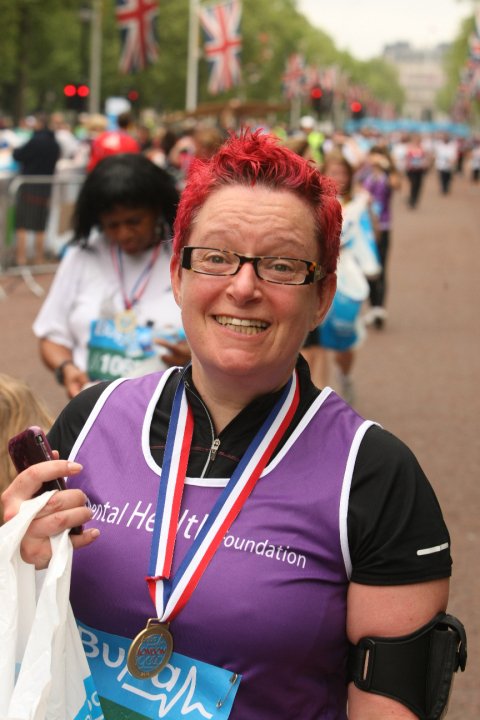 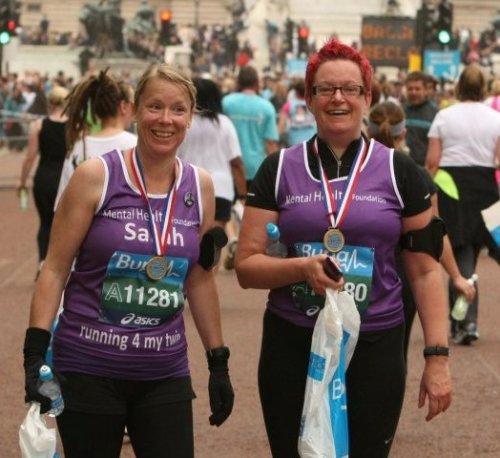 After the obligatory hugs, chat and visit to the portaloos we went to line up in Birdcage walk for the beginning of the race. We were there for about 50 minutes waiting to start, but it actually went quite quickly as we were so excited. I have been training for 4 months, running several times a week, building up my stamina and speed, helped along by my Twitter trainer based in Miami: @RobDallison :))

At about 10.20am we started running at last, with so many people lining the route cheering and waving it was wondferful, and I have to say it was like that all the way around. The route was really cool with several views of those finishing a long way ahead of us running towards us on the other side of the road. At 1k we saw the first female athlete to finish who ran past at an amazing speed. It was great running around London with the roads free of traffic and along with 13 500 other runners. We ran along the embankment for quite some way and looped around somewhere in the city going past Bank station and the gherkin. Finally we were on our last km and then turned into the Mall for the last 400metres. After I ran through the arch it was great to see a friend from Twitter @TWBrit cheering me on for the last stretch before crossing the finish line :)) We were running the race in memory of my brother who died last year, but actually didn’t mention him during the race at all. I think that was because we would have got too upset if we had. As we neared the finish line we held hands and put our hands up in the air. Once we crossed the line we both spontaneously hugged and shed a few tears. We had done something we had never dreamed we could do. Run over 6 miles in a race through central London and raised over four thousand pounds for charity. Thank you so *very* much to the absolutely wonderful people who sponsored me. I managed to raise ??1300 thanks to you guys. You all totally rock and I owe you a drink when I see you. Feel free to remind me :)) Overall it was a really fabulous day. I’ve already registered for next years race :)) Who wants to join me?? Sue x