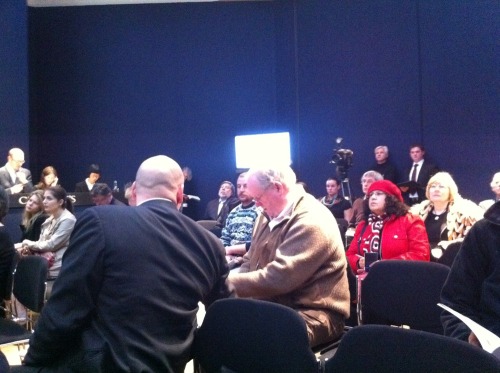 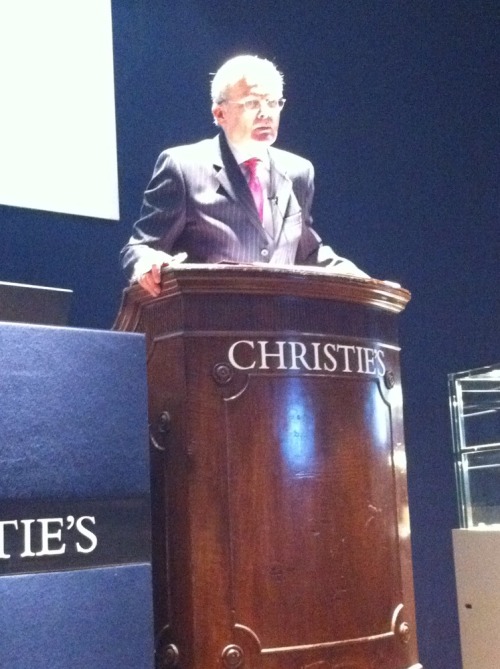 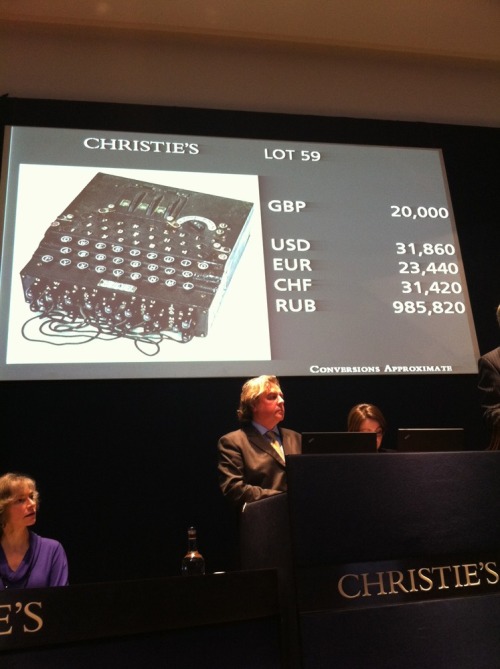 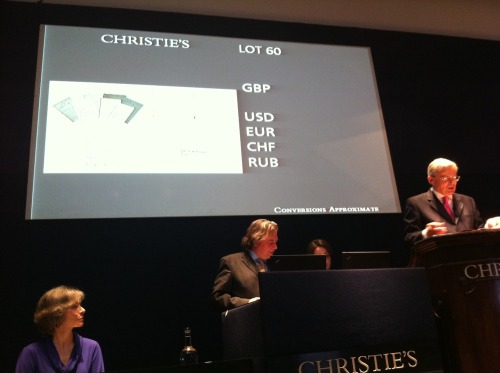 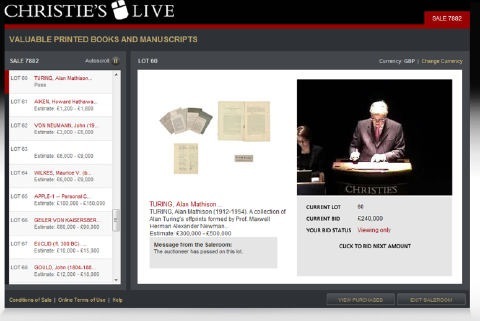 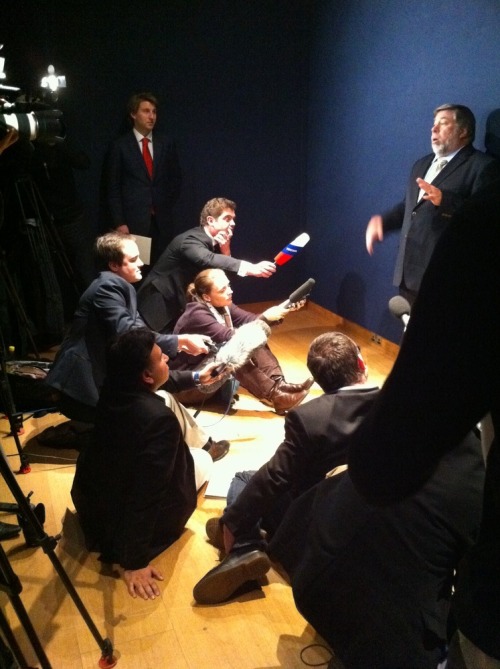 Well, what a day yesterday. Phew! I’ve never been to an auction before in my life! I was there to see whether Bletchley Park were able to buy the Turing papers, see my previous post if you’d like to know the details.

Once I’d got to Christie’s, found the auction room and sat down next to BBC technology correspondent Rory Cellan-Jones, what really struck me was how fast everything moved and how much money was changing hands. I guess that is to be expected, but it wasn’t until I was sitting right in the middle of it all that I really understood how exciting it could be. There were many people standing at the front and side on mobile phones and at laptops bidding on the lots that were coming up. I felt a bit like like I’d walked on to a film set. Maybe I need to get out more 😉
I was there to see Sale 7882 which was the sale of valuable printed books and manuscripts, and included interesting items such as an album of Faraday’s Deflagrations of Gold, and other metals which sold for £32, 450 and an Enigma machine which sold for £67, 250.
The Turing papers were Lot 60 which were due to come up at about 3pm. I had been keeping in touch with everyone on Twitter throughout the day about the auction and I felt like we were all going crazy with excitement together. I was so hyper-excited by the time the lot came up that I thought I was going to pass out!
Bids on Lot 60 started at £170k, so we knew straight away that Bletchley Park with approx. £87k in the kitty had no chance of winning. I was coming to terms with that when after only a few seconds….amazingly it was all over. It had been so fast that I didn’t even know what had happened! I knew that the bidding had stopped at £240k, but I didn’t know why, had it been sold? Thanks to friends on Twitter and Rory sitting next to me, I found out that the seller’s reserve price had not been met.
In the meantime an Apple-1 had been selling for £133, 250. Steve Wozniak had been sat at the back of the room, you can see him in the middle of one of my photos.
I left the room and found someone to talk to from Christie’s who gave me the contact details of an administrator regarding the non sale of the Turing papers. I then went back upstairs to see what was happening.
Lots of press people were setting up in an ante room and waiting for Steve Wozniak to join them for a press conference. I stayed and watched and then did a quick interview with Rory before leaving and making my way to the Google offices in Victoria.
I decided to walk as Victoria isn’t very far from Christie’s. I wanted to go over to Google to say thank you, especially to @SimonMeacham and Megan Smith,  for supporting Bletchley Park in their bid. I arrived expecting a cup of tea and a quick chat, but was whisked into a large meeting of Google software engineers, given a microphone and asked to tell everyone what had just happened (Thanks Simon! ;))
I’m joking, it was a great opportunity, how heartwarming to find out that many of the engineers there had been following the sale of the Turing papers, and were fans of Bletchley Park. Great people. Lovely, lovely geeks 🙂
Thank you so much Google from the bottom of my heart.