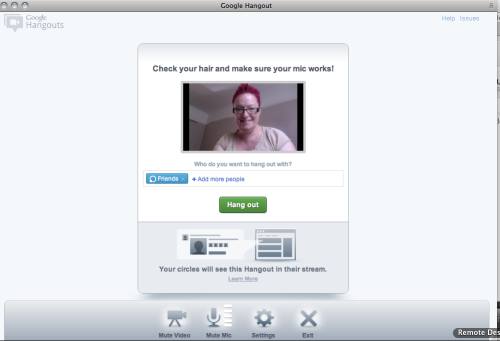 So what it Google+? Well after a first glance and a couple of hours playing around it seems to be an integrated environment which takes ideas from Facebook, Twitter, Skype, Flickr etc.

There are four main views: Home, Photos, Profile and Circles.

Circles are preset or bespoke groups that you can add people to, like lists in Twitter. The bespoke streams are Friends, Family, Acquaintances and Following.

The Home page shows the stream of discussion, comments from people that you have added to your Circles appear in the appropriate stream. You can toggle between them.

The Profile view is just that, straightforward.

The Circles view shows people who are in your circles, people who have added you and gives you the facility to find people.

The fact that there are these views or aspects really reminds me of some research that I did with Professor Mark Harman at KCL a few years ago: Aspect Oriented Software Development: Towards A Philosophical Basis I got very excited about it at the time, and actually should have another look at it.

Anyway, so that’s was a very basic description of the views, there are several other features that I’ve discovered so far:

Hangouts which look like videoconferencing with people that you add on the fly….looking forward to trying that later on today.

Sparks look like pre-defined interest based searches, so for example I’ve added Hiking, Bletchley Park and Computer Science to my Sparks.

Chat is, guess what? Yes, a chat facility within Google+.

OK, so that’s a very quick overview of what I’ve found and looked at in a couple of hours. I’ve taken a few screen shots (above) which will help give you a better idea of how it all fits together.

So, apologies as I’ve probably left loads of stuff out, but what do I think of Google+ so far? I’m addicted already! It was painful writing this blog post because it meant spending time away from it. Scary!

Now I just need to work out how to invite other people …..