REVIEWS OF THE IMITATION GAME

“One of the most thought provoking film reviews I have ever read.”

Here’s my review written after seeing the film and being on a panel afterwards at the Phoenix Cinema in London: The Imitation Game: Art Imitating Real Life?

There are many other reviews including:

“Broken codes, both strategic and social” The New York Times

“An engrossing and poignant thriller” The Guardian

Veteran Ruth Bourne, 2 Turing experts and me on stage after a screening of The Imitation Game in London

The book that inspired the film is Andrew Hodges Alan Turing: The Enigma a definitive biography of Turing. Very few of us would have heard of Alan Turing if it were not for Andrew.

Alan Turing: his work and impact by Barry Cooper who relentlessly promoted and campaigned for more recognition for Turing and his work by organising the Turing Centenary celebrations in 2012.

I’m eagerly awaiting a book by Kerry Howard “Women Codebreakers at Bletchley Park” the story of three female codebreakers: Mavis Batey, Joan Clarke and Margaret Rock. Kerry has recently had contact with Joan Clarke’s relatives which is very exciting news. The book will be out later this month (January 2015).  There’s also lots of info on Kerry’s “Bletchley Park Research” website.

FACT OR FICTION? WHAT IS TRUE AND WHAT IS FALSE?

Steve Colgan and I put together

“10 things you need to know about The Imitation Game“, which looks at what was true and false in the film. 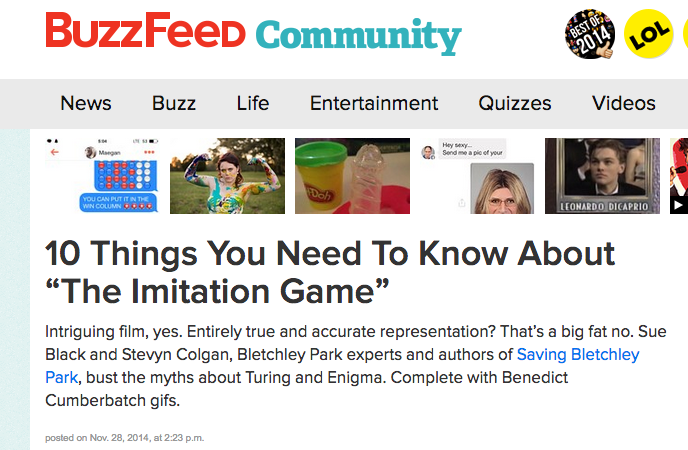 I, of course, have not met Alan Turing, but have met several people who did over the years of my involvement with Bletchley Park. Turing’s mentor at Bletchley was the codebreaker Max Newman. Newman also testified for Turing when he was sentenced and prosecuted. I’ve spoken several times to William Newman, Max Newman’s son about Alan Turing and what he remembers of him. William told me stories of when he was a child and Turing used to visit. I relate two of these in Robert Lewellyn’s Carpool interview with me from a few years ago about Turing and Bletchley Park and it’s significance.

CAN YOU HELP? WHAT’S THE BEST LINK YOU HAVE FOUND?

I will be updating this page regularly, this is just a start with information that I know of. Please do add useful links in the comments below and I’ll add them to the page as we go.

In honor of the @ImitationGame movie about Alan Turing-I'd like to point out Turing was a very good 2:46 marathoner pic.twitter.com/xHVgWo4mIk