led me to read his article on depression in The Independent “I feel for Stephen Fry. Nobody who has known depression would wish it on their worst enemy.” Alastair describes what it feels like to be depressed and said:

“I grade my depressions. Eight and a half is can’t-get-out-of-bed bad. Nine is can’t open my eyes, dress, shave, brush my teeth.”

As I read that I thought

“Oh. I get that! Is that depression?”

It sounds really silly but I’d never put the two things together properly in my head.  I’ve not had it that many times, and thinking about it, I’m lucky in that I know what triggers it. So, I guess if I just avoid the cause I’ll be OK? But the cause for me, as it sounds like the instance Alastair mentions in his article, is death. So actually I can’t do that much about it, or can I?

After my mother died when I was twelve and my Dad remarried someone who was an emotional bully I used to get depressed. With good reason looking back, because it was an awful life, never knowing what lies and accusations would come my way, and being ignored by my Dad on the street if he saw me. Sounds completely weird to me now, but, it happened. There’s so much more to that story….that’ll do for another time.

Much more recently when my brother committed suicide a few years ago I slipped into a horrible depression. I managed to cope just after his death even thought it was a horrifically awful thing to have to come to terms with I managed to get along. But then just as everything started getting back to normal I felt as if I was falling into a dark bottomless pit from which I would never escape. It was terrible. I was scared. It was like walking around, blind, in a dark, damp scary tunnel, knowing that there were people having a wonderful life a mile above me in the sunshine, but having no way of ever getting out of the tunnel, no way of ever being one of those people. 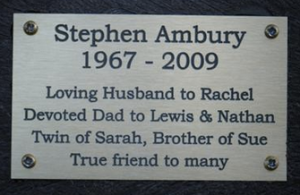 I told work that I wasn’t coping and was given time off work to sort myself out. I started CBT counselling which was really wonderful. From the first one hour session I was helped to work out why it was that I felt out of control with my brain was spinning round and round in never ending circles of unhappy thought. It felt like the counselling gradually helped me put together the rope ladder which helped me to clamber out of the dark tunnel and into the sunshine. It was incredible.

At some point I realised that the part of my grief which was fuelling the depression was this:

FACT My brother, sister and I had suffered some awful emotional cruelty at the hands of our father and stepmother.

IF we are all happy and enjoying our lives now

THEN everything is OK

ELSE everything is not OK

I had managed to build my life on the foundation of the FACT that we had all suffered, but we were all happy and enjoying our lives, so, PHEW! Everything is OK. But wait, we weren’t all enjoying our lives. Something had gone horribly wrong, my brother had killed himself. Everything was not OK.

That was what was making my brain spin around uncontrollably. I had lost my foundation stone, it had been ripped out from underneath me. What *was* my life? I didn’t know.

Over six weeks of counselling I managed to start building a new foundation stone, so that I had something to stand on, and then crafting a rope ladder to lead me out again into the sun. It was hard and it took time but it worked. I can’t thank my counsellor and my partner enough for helping me through that time, they were wonderful. I also some advice from the wonderful Stephen Fry who I tweeted in absolute desperation one day when I thought it would never get any better. He was very kind and supportive, just what was needed.

Fast forward to the second half of last year. My best friend Hazel was diagnosed with cancer in August. We decided to go out on a day trip once a week together somewhere fun. Our first trip out was to Brighton for the day in September. I picked her up in the car, we drove down to Brighton chatting, went for fish and chips and then a walk along the prom. It was a lovely sunny day. She got tired easily, so after a couple of hours I drove us back home and we discussed what we were going to do next time.

The week after our trip I was off to Brazil for a week and then another week in San Francisco, for me it was the trip of a lifetime, but I was unhappy about leaving Hazel for all that time. I had a great time though, met some very cool people, and came back home at the beginning of October.

The day after I got back I phoned Hazel to find out how she was. She had had some more results back. She had lung cancer and secondaries on her brain, it was terminal. I managed to finish the conversation with her before bursting into tears, I then cried all evening. The next day I went round to see her, to chat about where we we going on our next day out.

I was shocked to find when I arrived that she could no longer get out of bed. A dramatic difference from two weeks earlier. Over the next couple of months she battled the disease and we did what we could to help, but she died on 28th December 2012, my daughter Emma’s 29th birthday.

That period was like an awful swirling nightmare, I was unable to concentrate properly on anything I was doing. I only just managed to get through it without falling apart. I performed poorly on some work related tasks and felt completely emotionally drained all of the time. If it hadn’t been for my family again, Hazel’s friends Angie and Ryoko and my friend Alison I don’t know how I would have got through it.

Something I didn’t expect was that a couple of months ago, some weeks after Hazel had died, I suddenly felt unable to get out of bed in the morning. I just wanted to cry. I couldn’t understand why. What was going on?

It took me a couple of days to work out that it was a reaction to Hazel’s death and that I was slipping back down. Like a gradual fog taking over and enveloping me, then transporting me back down underground to the dark tunnel again. Ughh.

Once I realised what it was I contacted my counsellor. Unfortunately she was going through something similar with her best friend at the time. She recommended someone else, and a few days later I went to see her. As before, from the end of the first session I felt like I had a way to get myself out of the state that I was in. A chink of light, a glimmer of hope. I’ve now had six one hour sessions and am back on top, thank goodness.

So, I get depression. I’d somehow not really realised that before. I’ve described something of the two worst bouts of depression from the last few years, there have been other times when it has happened, and usually after the death of a friend or relative. At my age now, that unfortunately seems to be happening more and more often.

But then that makes me think, well maybe depression is normal. Surely having a strong reaction to the death of someone close is a completely normal thing to happen. The psychologist my workplace sent me to after the death of my brother said that my reaction was completely normal. Maybe its abnormal to not feel depressed in such a situation.

This leaves me wondering if there is something that I can do to help me not sink into the abyss when I do. Could I be doing something in my everyday life to stop it being such a dramatic, all engulfing feeling? I welcome your thoughts and opinions.